This is the website of VK2NGE. My activity has been very limited of late and hoping to rectify that soon.

My primary focus will be on portable operation when I am travelling.

Back in 1978, I obtained my Novice Operators Certificate and Novice licence (VK2NDA). I ran an Yaesu FT-7B transceiver in the car, and a Yaesu FRG-7 receiver at home.

For a short time, I ran a Yaesu FT-200, with a 4 element 3 band yagi. I only have the one photo of my old gear, the antenna lowered without the rotator. My old yagi has been pulled out of mothballs, and sometime in the future, will look for a tower and rotator to install it on.

Although I haven't been active since the mid eighties, I have now (Jan 2007) renewed my call (standard licence) and getting active on 2m and HF.

I have purchased a second hand Yaesu FRG-7 receiver, which is now set up using an old vertical antenna I had. The vertical is still not at full extension, so there is still some experimenting to be done. I may put up a long wire at some time.

I also have a Camnis HSC-010 scanner, which I mainly use for VHF listening.

For transmitting, I picked up a second hand Yaesu FT-209RH 2m handheld transceiver. It needed a new set of batteries, but otherwise runs OK. The FT209RH is setup in the car using a 900mm 2m/70cm dual band antenna mounted on the front guard.

I have a Yaesu FT-897D for home. It is driving a Bushcomm VA-71 vertical antenna through an LDG Z11 pro antenna tuner and 4:1 balun. I am also trying to drive the Barrett 910 antenna on the car with the FT-897 for portable use.

After my visit to the Wyong field day in 2008 year, I now have an FT-7800 dual band transceiver, which will go in the car.

The Mid North Coast Amateur Radio Group have put together a kit for a portable dipole antenna (Ozi-pole) which covers 80m to 6m. I purchased the kit at the field day, and will put it together when a get some time. I intend to take it with me when I go camping, to use with the FT-897. 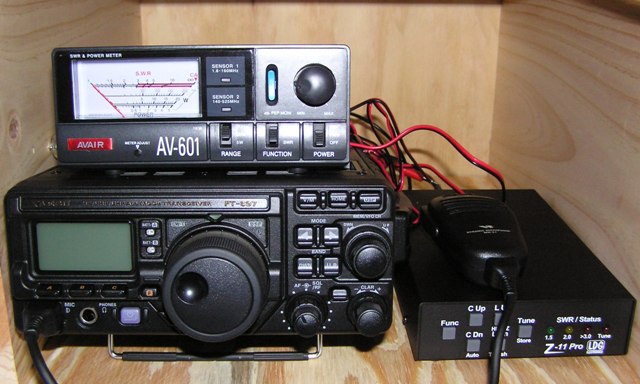